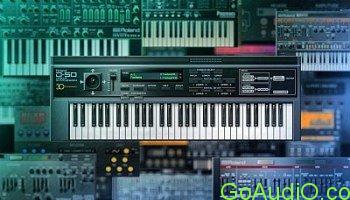 Authentic recreations of LEGENDARY Roland analog and digital synthesizers
Inspired by the past, built for the future- amazing-sounding Roland ACB synths with a familiar workflow

Roland D-50 Ver.1.06 – Based on Roland’s DCB technology, the Roland D-50 brings the ultimate 80s synthetic sound to your tracks in new ways!

Roland JUNO-106 Ver.1.04 – Perhaps the most popular vintage synthesizer for EDM manufacturers and electronic musicians around the world, Roland JUNO-106 has become legendary thanks to its unique combination of incredible Roland analog sound, a simple and effective interface. The Roland JUNO-106 synthesizer is a complete re-creation at the component level of the original 6-voice instrument, up to the classic Roland 80017A VCF / VCA integrated circuit!

Roland JV-1080 Ver.1.05 – The JV-1080 is the most famous of the Roland PCM machines and inspires the creation of the Roland Cloud JV-1080. It was a huge success with artists and producers, which ultimately led to the creation of even more powerful models, such as the JV-2080 and XV-5080. Roland Cloud JV-1080 has the look, feel, and factory features of the original, as well as advanced effects, additional waveforms, and increased polyphony of its successors. Bottom line: this is the final sound of the Roland era of the 90s – now in a modern plugin for your DAW.

Roland JX-3P Ver.1.00 – The JX-3P software synthesizer offers a crystal-clear sound of an ACB-component (on an analog circuit) – replication of the original sound. Get the gamut from classic string sounds to crushing metal pads – this six-part polyphonic re-creation has it all.

Roland PROMARS Ver 1.09 – The PROMARS Software Synthesizer is a complete reproduction of the rare and powerful PROMARS synthesizer first released in 1979. Designed first as a “kid brother” to the JUPITER-4, the Roland PROMARS Compuphonic Synthesizer married the stability and flexibility of microprocessor control with the awesome sound of analog. The result was a synth that offered incredible punch (2 oscillators per voice and a great-sounding filter) and outstanding stage presence (10 Preset and 10 User Patches- one of the first with memory!). While today we take programmability for granted, the inspiring sound of the PROMARS could only have returned through the power of ACB, and is now available as an incredibly-fun software synthesizer on Roland Cloud!

Roland SH-101 Ver.1.12 – The SH-101 Synthesizer is a complete re-creation of the legendary SH-101 – down to the smallest details that make it one of the most popular classical synthesizers of all time. Based on the ACB technology, it recreates not only the sounds of the SH-101, but truly models the behavior of analog circuitry – all the nuances of authentic sound from the creator of the original synthesizer.

Roland SRX DANCE TRAX Ver 1.01 – Created in the spirit of Roland’s seminal hardware board with reimagined versatility. In the early 2000s, Roland’s SRX series of expansion boards were an innovative way of adding fresh flavors to your synth. Installed directly into Roland hardware, each board created a tiny genre-centric world of its own. From classic piano spreads (celebrated in Roland Cloud with our SRX KEYBOARDS VST) to strings and woodwinds, the SRX series expanded players’ pallets and opened new creative doors.
“Supreme Dance,” the fifth entry in the SRX-series and “Platinum Trax,” the eight entry in the SRX-series, catered to dance, hip-hop, and electronica, the original hardware version sampled waveforms of vintage and contemporary synths including Junos, the JP-8000, and many others, resulting in a robust collection of sounds: from lush synths to brazen drums.

Roland SRX ORCHESTRA Ver.1.05 – The first software adaptation of the legendary Roland SRX platforms, the SRX-Orchestra, brings to your DAW some of the most favorite and recorded orchestral sounds in history. The SRX-Orchestra provides hundreds of fresh, inspiring sounds for composers, musical accompaniment for films or any situation in which realistic orchestral sounds and vocals are needed. Flutes, clarinets, choruses and even dense percussion stand out noticeably with patches that provide a multitude of orchestral voices with a single keystroke. With over 425 orchestral patches and the ability to create and customize your own, the SRX-Orchestra is destined to become a legend a second time.

Roland SRX WORLD Ver. 1.0.1 Created in the spirit of Roland’s seminal hardware board, SRX WORLD is packed with sounds from around the world to enhance your compositions.
Roland Cloud’s SRX WORLD collection arrives bursting with 407 unique patches, 10 rhythm sets, and 867 waveforms. In this collection are crisp percussion, exotic woodwinds and hypnotic grooves to enrich your project with sounds from all around this big blue marble we call home. Download SRX WORLD as part of Roland Cloud’s suite of virtual instruments and embark on a journey from the comfort of your home studio.

Roland SYSTEM-1 Ver.1.10 – Get the power of sound and versatility of the popular synthesizer SYSTEM-1 in a virtual instrument.
Like the SYSTEM-1 hardware, this software version breaks new ground with remarkable flexibility and an extensive palette of amazing sounds. He has a bold, obvious character associated with Roland synthesizers for more than four decades.

Roland SYSTEM-8 Ver.1.31 – Inspired by the past, built in the present, designed for the future, the Roland SYSTEM-8 synthesizer is a virtual analogue sound power station. Advanced software synthesizer that works on analog circuit simulation (ACB). Three oscillators for voice, incredible multimode filtering, a lot of modulation capabilities and Roland DSP quality effects create a sound palette of almost unlimited potential, so legendary artists around the world have already made Roland SYSTEM-8 part of their arsenal.

Roland SYSTEM-100 Ver.1.08 – The software synthesizer SYSTEM-100 PLUG-OUT is a modern reproduction of the now legendary 1975 semi-modular monosynthesis. It combines the functions of the original synthesizer Model 101 Synthesizer and Model 102 Expansion, resulting in an incredibly unique and versatile two monosynthesis oscillators with the possibility of modular routing.

Roland TB-303 Ver.1.01 – Utilizing ACB (Analog Circuit Behavior) modeling, Roland Cloud’s TB-303 adds a host of new features to the iconic instrument. Roland Cloud’s TB-303 Software Bass Synthesizer takes the classic instrument to the next level. Utilizing the same ACB (Analog Circuit Behavior) modeling as the Roland JUNO-106, JUPITER-8, and others from our Legendary series, the virtual TB-303 captures the hypnotic tone of the original hardware and forms the perfect complement to the TR-909 and other instruments in Roland Cloud.

Roland TR-808 Ver.1.04 – Following the announcement of the Roland TR-8S iron instrument with the ability to play the sounds of classic drum machines of the past, Roland 808 and 909, but also 707, 727, 606, the Japanese manufacturer introduced the virtual instrument Roland Cloud TR-808 Rhythm Composer. Roland used Analog Circuit Behavior technology to transfer the analog circuitry of the device into the program code to recreate the sound of the original TR-808 drum machine. Moreover, new features have been added.

Roland TR-909 Ver.1.04 is the first official virtual version of the legendary drum machine that reproduces the sound of the original instrument exactly. The sound signal transmission and generation schemes were reproduced using a special modeling technology Analog Circuit Behavior, which allows to achieve the most accurate and similar to analog audio equipment. For greater plausibility and interesting sound, the developers equipped each pattern and each sound with eight variations that are switched in a random order during use.