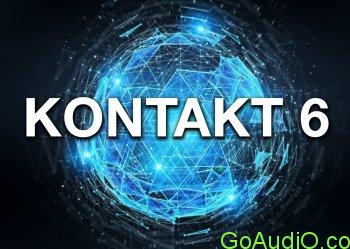 With KONTAKT 6, you can sound like a snare drum, a symphony orchestra, or anything in between, from a universe of sampled instruments. It’s a simple sampler when you want it to be, and a deep sonic scripting laboratory when you need something more. The next generation of the world’s favorite sampling platform gives you new instruments and new features under the hood – so you can layer, link, stretch, and shape your sounds any way you can imagine.

Over two decades, KONTAKT has become a highly-developed engine for creating and playing sampled instruments. KONTAKT 6 offers more for players and builders alike:

Enhanced effects: Even more effects for your creations, for greater expression and realism

•FIXED KSP: In certain cases, the ui_file_selector element would revert to its base path, forgetting the last selected file (v6.1.0 regression)
•FIXED KSP: Controlling most convolution parameters from KSP was broken (v6.1.0 regression that caused all related controls on many instruments to become unresponsive)
•FIXED KSP: The getter for $CONTROL_PAR_HIDE would not return the right value if the value was $HIDE_PART_BG (v6.1.0 regression that caused severe cosmetic issues on Spitfire products)
•FIXED KSP: Any use of $HIDE_PART_CURSOR would always apply to all cursors of the xy_pad it was used on as opposed to just the one intended (v6.1.0 regression)
•FIXED Kontakt would crash when trying to load an instrument that had automation assigned to controls that were removed after the assignment (v6.1.0 regression that affected certain products by Big Fish Audio and 8Dio)
•IMPROVED Kontakt’s new Auto-Apply feature (introduced in 6.1.0) now ignores changes in subfolders of the watched folders (anything deeper than scripts or performance_view)
•IMPROVED KSP: All PGS-related coding mistakes are now Warnings instead of Errors, both in how they are shown in the Creator Tools Debugger, and in that processing doesn’t stop
•FIXED KSP: There were some unexpected behaviors around the use of nested panels and certain Z layer settings
•FIXED KSP: The getters for $ENGINE_PAR_WT_FORM_MODE and $ENGINE_PAR_WT_QUALITY would always return 0
•FIXED KSP: Info Pane text would not appear for ui_button controls