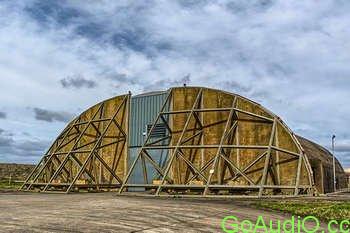 RAF aircraft hangar at Bentwaters park, UK.
This aircaft hangar was used by the Royal Air Force (RAF) during the Second World War, and by the United States Air Force (USAF) during the Cold War, being the primary home for the 81st Fighter Wing. The structure of this hardened hanger is a dome of solid concrete. It has an exceptionally long and deep reverb. Recorded using a genelec 1037 and 6 DPA 4006 Omnidirectional microphones.

It appears in the “Design” section