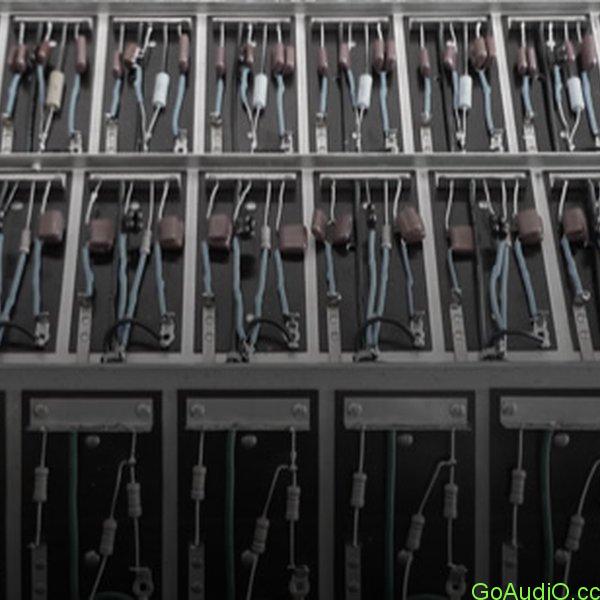 The Novachord is a gargantuan, entirely tube based, 72-note polyphonic synthesizer with oscillators, filters, VCAs, envelope generators and even frequency dividers. We sampled every one of the 72 notes on this beast – not just once, but over and over, with different settings each time.

It is a little known fact, but the worlds first commercially available synthesizer was designed by the Hammond Organ Company in 1938 and put into full production from 1938 to 1942. The Novachord is a gargantuan, entirely tube based, 72-note polyphonic synthesizer with oscillators, filters, VCAs, envelope generators and even frequency dividers. The first instrument was delivered to President Franklin D. Roosevelt on Jan. 30, 1940 as a birthday present. But despite this auspicious start, the 500-lb instrument struggled commercially.

The Ghostly Sound of Hollywood

Neither piano nor organ, it was misunderstood by many and was not the success it perhaps could have been. Stability issues contributed to this, due in part to World War II and its impact on component supply and manufacturing. However, its eerie, ethereal sound did find sympathetic ears, and became a mainstay of film and television soundtrack production. Gone with the Wind, The Maltese Falcon, Rebecca, House of Frankenstein, The Outer Limits and The Twilight Zone are just a few classics that feature Novachord as part of their soundtrack.

Production stopped because of a shortage of parts in 1942; poor sales kept it from being built after the war. It is estimated that less than 200 Novachords are still in existence and considerably fewer than this are in working order.

When we first read about the Novachord, we knew we had to sample it. The idea of those 163 valves turning each key into a synthesiser in its own right, the iconic, part horror-organ, part-analogue synth sound, the huge bakelite dials – everything about this instrument has a unique character that deserves to be captured and made available to a new generation of musicians.

We sampled every one of the 72 notes on this beast – not just once, but over and over, with different settings each time. This gives the Livepack Novachord a huge selection of textures and timbres, each programmed with full integration into Ableton Live. Forget sterile, gimmicky modern synths – Novachord’s mature, living, analogue sound is warm and textured straight out of the box – oozing character with every patch.

When you read Phil Cirocco’s account of his full restoration of the Novachord 1256, your first thought is to ask “who would undertake such a thing?” The second is that if someone did, it would surely take ten years. That Phil completed it in only a year is just one of the many staggering things about the project, and a testament to his dedication and craftsmanship. Read the full account of the restoration, and all things Nova, on Phil’s website. Phil is a highly regarded electronics engineer and synth designer from Georgia, USA. He runs Cirocco Modular Synthesizers and has worked with many famous names, both artists and synth designers. He is widely considered to be the leading engineer for ARP 2600 repairs and modification, so if you have one, we suggest it pays a visit to Georgia!

Will not work on non-cracked version of Ableton Live