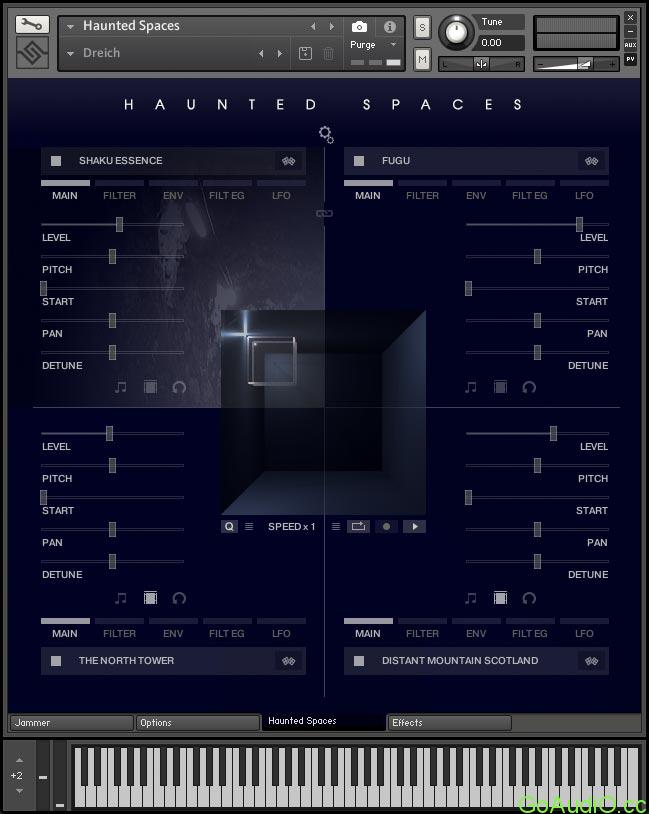 The idea that certain places take on the weight of past events is familiar to all of us.

Renowned field recordist Chris Watson has spent years collecting audio recordings from such places in one of his most personal projects.

The heart of Haunted Spaces is the Cube control – a 4-point vector controller that allows you to create complex movements between 4 different waveforms of your choosing. The cube can be fully animated and the movements tempo-synced to your DAW. Each of the 4 waveforms can have independent filter, envelope, pitch and LFO settings.

Haunted Spaces features a huge library of over 400 presets, created by a team of incredible sound designers.

This video showcases a small selection of the preset sounds.

Chris Watson has collected Haunted Spaces recordings from all over the world. Many locations are visually as well as sonically spectacular, as seen in this collection of photographs.

Haunted Spaces is based around a 4 point vector, or ‘XY’ controller.

This allows you to fade between 4 different waveforms, each with their own synthesis setup.

The Cube can be fully automated, all movements are recordable and sync to the DAW tempo.

Chris Watson is one of the world’s leading recordists of wildlife and natural phenomena.
Born in 1953, in Sheffield, Watson was a founding member of the influential Sheffield based experimental music group Cabaret Voltaire. His sound recording career began in 1981 when he joined Tyne Tees Television. Since then he has developed a particular and passionate interest in recording the wildlife sounds of animals, habitats and atmospheres from around the world. As a freelance composer and recordist for Film, TV & Radio, Watson specialises in natural history and documentary location sound together with sound design in post production.