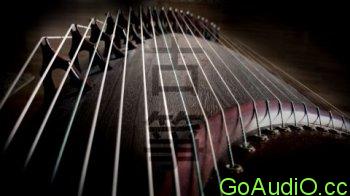 The Gu Zheng
The Guzheng is a traditional Chinese instrument dating from the Qin dynasty (c. 200). It is the ancestor of the Japanese Koto as well as several other zither-like instruments found across east Asia.

A modern Guzheng typically has 21 strings over movable bridges, mounted on a large resonant half-tube box made of wu-tong wood, typically about 1.7m long.

Generally the notes are plucked with the right hand; the player wearing tortoise-shell finger-picks. Sometimes virtuoso performers will use finger picks on both hands. Other playing techniques include tremolo, harmonics, and sweeping glissandos.

EXPRESSION TOOLS
Guzheng features a range of custom processors, to recreate the techniques and fluid expression of the Guzheng player.