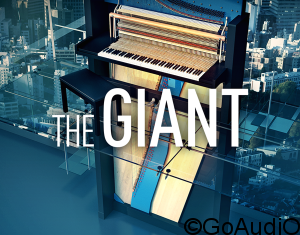 You’ve never seen or heard a piano like this. THE GIANT captures the sound of the world’s biggest upright piano to deliver something even bigger: An intense, dynamic playing experience with a sound that’s nothing short of inspiring.

From urban pop, film score pathos, soft piano ballads, driving rock riffs or dim jazzy timbres, the untreated sound of THE GIANT instantly satisfies – straight out of the box. Add detailed control options and a dark, cinematic version of the instrument, and THE GIANT’s distinctiveness is matched only by its versatility. Meet your new go-to piano for virtually any style.

Sampled in amazing detail, THE GIANT is a unique instrument with an extremely strong low end, crystalline highs, rich overtones, plenty of punch, and a colossal sonic spectrum – from the devastating to the sublime.

This powerful sound is easily enhanced and modified to fit your productions. 40 meticulously-tweaked presets provide production-ready starting points, and detailed control features let you precisely shape the sound in every dimension, making the instrument supremely versatile, whatever the project.

THE GIANT is two instruments in one. A dark, cinematic alter ego, effectively a separate instrument alongside the main piano, offers an irresistible playground for sound design and dramatic effects. Create your own mix of unconventional, individually-sampled sound sources – overtones, resonances, plucked strings, release sounds and special techniques such as piano hits, kicks, sweeps or scratches – all directly and instantly playable from the interface, delivering professional results with a fast workflow. 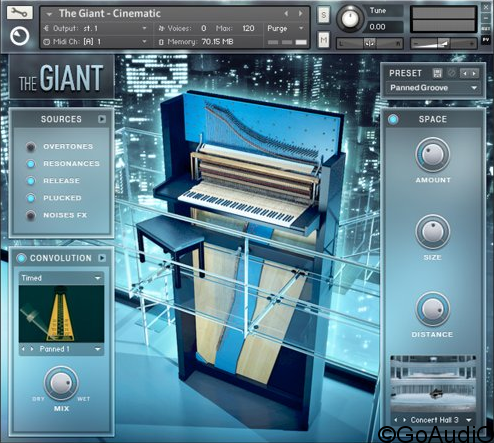 These avant-garde sounds are also enhanced with detailed control options and a dedicated FX convolution engine with over 100 special piano effect impulse responses.

Galaxy Instruments have created a number of virtual instruments, including the KONTAKT-based ‘Galaxy’ line of pianos and ‘Galaxy X’ – a virtual instrument based on the same ‘effect convolution’ technique used in the Cinematic version of THE GIANT.