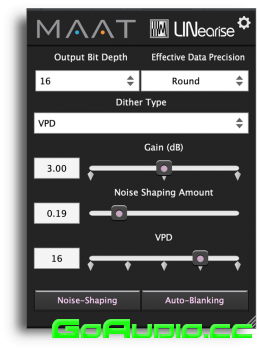 MAAT’s LINearise is the final link between production and delivery. Offering optional word length reduction and three dither spectra tailored to both analog and digital delivery of assets, LINearise is highly adjustable to help create your own signature “sound.” In addition to TPD and weighted TPD, LINearise features VPD™, Variable Probability Density, an exclusive feature that allows you to dial in the dither spectrum anywhere between rectangular and Gaussian distribution.

Need More?
LINearise has it. As you’d expect, automatic muting and variable bit depth but also a choice of rounding, truncation or no change to those least significant bits. Noise shaping and dither gain are also adjustable so, between all the choices, you can define the perfect low amplitude character for your client’s work.

Dither is a fundamental aspect of today’s DAWs. Although not usually thought of as such, re-dithering is important DSP (Digital Signal Processing). In the distant past, much of the pioneering research on dither was performed at Bell Labs. According to information theory, you should add a pinch of noise to your digital audio every time you change it to keep it distortion–free and to embed program content in the noise floor. That’s dither. Use it to make your digital audio less…“digital!”