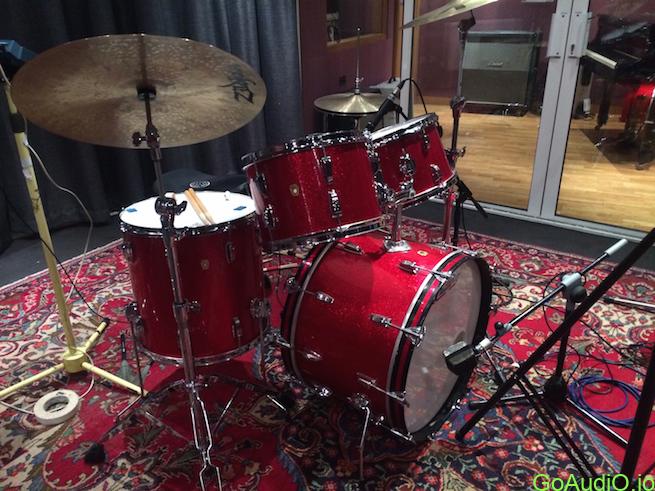 The Vintage Folk Rock Kit is an awesome kit for a 60s / 70s Folk Rock or Indie rock sound. We used the engineering skills of the legendary engineer / producer Phill Brown (Laura Marling / John Martyn / Rolling Stones) whose indepth knowledge of recording bands during these years helped mould the sound of the kit. The Kit used was a beautiful old 1966 Ludwig Hollywood kit and it was setup by legendary drumtech Martin Oldham. To direct us on the sound of the kit we used Folk specialist drummer Martyn Barker (Rufus Wainwright, Richard Hawley, Katherine Williams) who sampled the kit using sticks, hotrods and brushes which effectively gives you three kits – nice!

For the sound Phill Brown (John Martyn, Bob Marley, Rolling Stones, Talk Talk, Led Zeppelin) used his years of accumulated knowledge and went back to the time of the 60s when he was based at Olympic Studios. Phill’s idea was to create a 1960s drum sound with a modern twist. Instead of positioning the microphones close to the kit he wanted to capture a natural drum sound and record the ‘dead’ room. He used only five microphones on the kit: one on the kick, the snare, two kit microphones placed around the kit which provide a surprisingly good stereo picture, and a mono overhead. All of the mics were recorded through API mic pre’s.

The kit was recorded in the drier sounding room at Livingston (we saved the liver room for the Modern Folk Rock Kit ). Although the sound is controlled, it has a great ambience around it. Livingston has been used to record a multitude of hit records over the years and is well known for being one of London’s top drum rooms.

The kit we used for this was a beautiful vintage 1966 Ludwig Hollywood Kit. It is almost identical to the Super Classic kit which Ringo Starr once used, except it has two rack toms rather than just the one. These are beautiful sounding kits. The snare used was a 1967 wooden Ludwig Snare owned by Martyn. We also include some tambourine and shaker articulations.

The Kontakt 5 Pack comes with the Drumdrops Kontakt Instrument for exclusive use in Native Instruments full version of Kontakt 5.5. The instrument comes with it’s own mixer section giving you control over the individual drum tracks and convolution reverbs that we have included. Each channel has an EQ and Transient Master. You can change the velocity curves of the drums and there is a randomisation feature to add subtle changes to make the drums even more realistic. The Kontakt pack comes with 57 separate articulations, 24 velocity steps and includes 5 round robins. In this kit (like our vintage Gretsch kit) our Kontakt feature known as Mix Blend comes into its own. You can control the balance of the 3 kit microphones positioned around the kit on each and every drum. This means the Kontakt pack comes loaded with an incredible 16400 samples.

What Is the Kontakt 5 Pack?
The Vintage Folk Rock Kit is the first kit to use version 2 of the Drumdrops Kontakt Instrument. This new instrument has been designed and rebuilt from the ground up. Gone is the step sequencer but in are loads more effects and a much more customisable v-drum midi map section. The instrument provides the user with complete control over each of the drums with the inbuilt mixer. With our mic mixer feature you can adjust the mix of each of the 5 mics used to record the kit on each drum. It gives you absolute control. The instrument also allows you to add convolution reverbs that have been sampled from a variety of the studios and outboard we use as well as two delay settings. To increase the realism of the overall sound we have included multiple round robin samples which utilises the 16400 included samples and there is also a randomisation tool. Each channel has a 4 band equalizer, a compressor, shape feature and tape saturation. The stereo buss comes with its own compressor, limiter, EQ, Crush and image tools. It comes with a selection of MIDI maps including full compatability with Roland V-drums and the DTX900. However the new kontakt instrument also allows drummers to build their own custom MIDI maps to suit their kit perfectly. This pack is perfect for Producers, Engineers, Drummers, songwriters and musicians who want the highest level of realism and are users of the latest full version of kontakt 5.5 (not kontakt player).