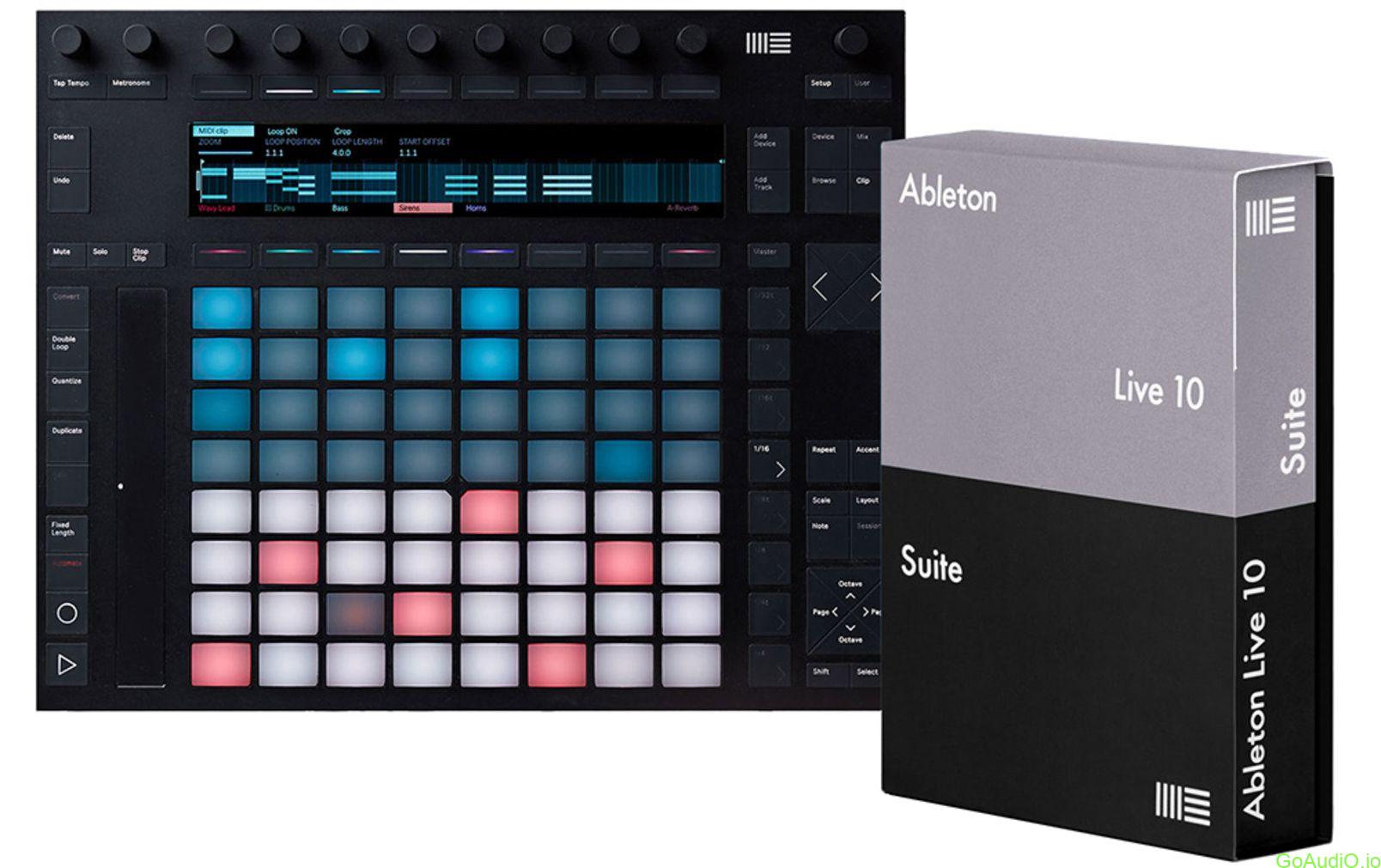 Create bolder sounds with Live’s new devices. Stay in the flow with a multitude of workflow improvements. Do even more away from the computer with Push. Build your sound with a curated library. And get the unlimited potential of Max for Live, seamlessly built in.

Wavetable
Immediately playable, infinitely capable, Wavetable is a new synthesizer built by Ableton. Shape, stretch and morph sounds using wavetables derived from analog synths, and a range of other instruments and sounds. Start sculpting sounds right away—even without a deep knowledge of synthesis—or explore its rich palette and potential through an intuitive interface.

Echo
Echo brings together the sound of classic analog and digital hardware delays in a single device—your new go-to delay. Drive and shape sounds with its analog-modeled filters, turn up the noise and wobble for vintage imperfections, or add modulation and reverb to create diffuse soundscapes, wailing feedback and more.

Drum Buss
Drum Buss is a one-stop workstation for drums, capable of adding subtle character or bending and breaking drums to your will. Add warmth and distortion with drive and crunch, take control of dynamics with compression and transient shaping, dial in and tune boom and control bass decay with the dedicated low end section.

Pedal
With separate circuit-level models of overdrive, distortion and fuzz guitar pedals, Pedal brings the character of analog stomp boxes to Live. The effect goes all the way from subtle to reckless—it excels at warming up vocals and other instruments, driving synth sounds or completely smashing drums. And of course, it sounds great with guitars.

Live now supports macOS Catalina (10.15).
Important: before updating to macOS 10.15, please read this Knowledge Base article.
On macOS, Live now uses AVFoundation instead of QTKit / QuickTime for MP3 decoding, video playback and video export. The MP3 experience should be unchanged. Video playback and exporting is now much faster. Some videos using old formats can no longer be played back. For a list of formats that are no longer supported, see https://support.apple.com/en-ca/HT209000 (Note: this article is about FinalCut, but applies to Live’s video support as well.) While running macOS Mojave (10.14) or earlier, such videos can be converted into a supported format by opening them in QuickTime Player (see https://support.apple.com/en-us/HT202884 for more information).
Please read this Knowledge Base article.

Automation
When dragging, stretching or skewing automation, or when changing the curve of a segment, pressing the ESC key now resets the automation to its original state.
The Toggle Automation/Modulation buttons now appear grayed out for unwarped clips.
The global “Snap Automation To Grid” option is now ignored when Draw Mode is enabled, so the quantization always matches the visible grid.
A “No more automation events could be removed” message now appears in the Status Bar when performing the “Simplify Automation” command on an envelope has no effect.

Interface Improvements
Live now supports Home, End, Page Up, and Page Down key interactions in chooser controls and context menus. Home and End keys move the selection to the first and last options respectively. Page Up and Page Down keys move the selection by the size of the page, or by 25 entries if the chooser control is collapsed.
The metronome’s Rhythm setting is now saved in the Live Set.
The “Freeze Track” command is now available in the context menu of automation lanes.
Live’s browser now starts searching after entering a single Chinese character.
Adding or removing scenes in a Live Set with many scenes is now significantly faster.
Added support for emoji characters in all text fields on the following systems:
Windows 10 1803 and later
macOS 10.11.6 and later
The Preferences dialog window is properly centered when Live’s zoom level is not at 100%.

Device Improvements
In the Multiband Dynamics device, the “Shift” modifier is now used to fine-tune the bands, and the “CMD” (Mac) / “CTRL” (Win) modifier is used to adjust all bands simultaneously.
Text in the Redux device is now correctly displayed.
Made some minor refinements to the Channel EQ device’s UI.

Control Surfaces
Added support for the Akai Professional Force, MPC X, and MPC Live.
Every Push 2 user will get a firmware update to v.1.0.64 if their Push firmware is older. This firmware version implements a fast SysEx that allows setting any RGB LED to any 16 bit-color, independent from the 128-entry palette.

VST3
Added support for the IInfoListener interface in VST3 plug-ins. Supported properties include Live’s track name, track index and track color. Certain plug-ins will now show Live’s track names in their Mixer section.
When running VST3 plug-ins in HiDPI mode, it is now possible to disable scaling their GUIs via a “Auto-Scale Plug-in Window” context menu entry. This entry appears in context menus of plug-in devices in the browser, and in the title bar of plug-in devices in the Device View.

Video
When selecting FLAC as the File Type in the Export Audio/Video dialog, video export is now disabled. AIFF or WAV must be selected to export video with sound. This is consistent with the MP3 export behavior.

Fixed a bug where Live would crash when stopping recording within the latency period, under certain circumstances.
Live no longer crashes when recording into a Session slot after a device with latency has been deleted.
Fixed a crash that occurred when editing the value of an automation segment within an inactive time selection.
Fixed a crash when moving a device with overridden Arrangement automation to a different track.
Fixed a bug which created an erroneous breakpoint when switching between stretching and skewing automation.
Previously, plug-in parameters would disappear from their Live panel if they were edited using automation shapes.
Previously, recording clip automation into the Arrangement did not work as expected.
Previously, when the Lock Envelopes switch was enabled, moving automation on a frozen track would not work as expected.
When cancelling drawing automation in Draw Mode by pressing the ESC key, the cursor now stays at its current position.
After cancelling editing automation by either pressing the ESC key or entering an invalid value, the mouse cursor now reverts to the correct position when opening a context menu.
Dragging a time selection of a discrete automation would cause the mouse to jump erratically.

Midi Recording and Editing
Fixed a bug where very short notes arriving from external MIDI controllers were not always recorded.
Fixed an issue where a Set could become corrupt if the MIDI note selection changed during an interactive operation in the MIDI Editor, in some cases.
Fixed a bug where steps in MIDI CC envelopes were incorrectly imported from MIDI files.
Fixed a bug that prevented correctly stretching MIDI notes in a time selection, under certain circumstances.
Velocity values are once again correctly displayed as integers in the MIDI Note Editor, if their velocity markers are dragged.
On Windows, MIDI CC, Channel Pressure, and Pitch Bend events are now sent out smoothly via MIDI at buffer sizes of 128 and below.
Fixed a crash that could occur when importing an empty MIDI clip.

Interface
Improved the appearance of the Wavetable and Impulse devices, as well as Live’s plug-in device panel.
Fixes three issues with crash recovery:
Crash recovery would crash again and again when trying to recover from a crash, instead of only recovering the history until a previous crash.
When trying to recover a Live Set a second time, Live would end up with a corrupt history and possibly crash when undoing directly after recovering.
The percent values in the crash recovery progress display would not start at 0% when recovering a file that was saved the last time Live was run.
Previously, when Shift-clicking to select multiple Arrangement tracks, and editing a parameter for all tracks, the selection focus was erroneously invisible.
Previously, the blue LED that indicates clip modulation would appear on slider controls that were not modulated.
Previously on Windows, a Windows notification sound would play after using the “Consolidate Time to New Scene” command and pressing the Space bar.
Fixed a crash that occurred when opening the View menu while the Master track was selected.
Previously, the playhead would disappear after stopping the song, and would only reappear after making a time selection or clicking in the Arrangement View.
Fixed a crash that occurred when dragging a multi-selection of Session clips past the first scene.
Previously, clip fades could be reset when performing a copy/duplicate command.
Previously, tracks contained within certain Live Sets created by third-party software could not be unfolded in the browser.
Zooming to fit content to the Detail View with the “W” button now works correctly when content is within negative time.
Fixed a bug that caused playheads to appear in the wrong color after resizing Live’s window.
When using IME and editing info texts, the text field now retains typed input when clicking outside the text field, without the need to press Enter first. On Windows, reconversion is now supported for Japanese input, and the henkan (変換) key now works as expected.
Fixed a bug that prevented Live from handling more than 1,000 scenes correctly.
Fixed auto-scrolling for automation in the Detail View.
Previously, note velocity ranges in the Status Bar were displayed with four decimal places, when notes with different velocities where selected.
Fixed a bug that caused Live to hang when dragging attachment files to a Drum Rack.
Previously, scrolling through a context menu using arrow keys could erroneously select the context menu item positioned underneath the mouse cursor.
Previously, the Clip Stop button would not blink after it was clicked.
Fixed a crash that occurred when opening the View menu while the Clip View was in focus and no clip was selected.

Devices
Fixed the value ranges of the Velocity parameters in the Collision device.
Automation applied to parameters in the Wavetable device now has more consistent timing.
Live Sets created in versions of Live older than 10.1 that contain instances of Simple Delay or Ping Pong Delay devices with delay time automation now sound more consistent.
Fixed a bug that caused the Wavetable device to output +100 dB when changing the range of a mapped Macro, under certain circumstances.
Re-added the correct info text for Sampler’s Pitch Envelope On/Off button.
Fixed two bugs that affected the appearance of Simpler’s loop markers.

Control Surfaces
Fixed a bug where switching between various mixer modes on the Launchpad MK2 could result in the faders becoming stuck on controlling sends.
Fixed a bug that caused an index error and incorrect LED states when using the Launchpad MK2 in Mixer Mode, under certain circumstances.
Previously when using Push 2, MIDI tracks would not become automatically armed if the Novation SL MkIII control surface was selected in the Link/MIDI Preferences.

Audio
On Windows, exporting audio would not work as expected and could cause Live to crash, under certain circumstances.